September 2016
The current Mars Mission Plan for Humans landing and waking on the surface of Mars by 2035.
Sending Human to Mars is not cheap or easy. The mission that will require building the Mars Space Transport Ferry and have people live on Mars for a year will not happen in the 2030’s.

But NASA and Boeing are determined to have people walking on Mars by 2035. Their Mars mission is modest and doable.

Using the SLS Rockets (both 70 and 130 tons), components for a habitat module will be launched from Earth and put into orbit around the Moon. Astronauts will live in the habitat module on the way to Mars and back.

About 4 astronauts (US, European) will launch from Earth aboard the Orion Space Ship and rendeavous and dock with the Habitat orbiting the Moon. From Moon orbit they will leave for Mars on a 7 month journey.

When they arrive in the Mars vicinity, Orion/Habitat will go into a Mars orbit and rendeavous with a waiting orbiting Descent Module put there by an SLS Rocket prior to their arrival. At this point Mars is at it’s close point to the Earth, 35 million miles away. The Astronauts will go into the Descend Module and land on Mars near another module called an Ascent Module already there and also put there by an SLS Rocket.

The 4 Astronauts will explore Mars for less than 30 days. They will climb into Ascent Module and be launched into a Mars orbit, rendeavous with the orbiting Orion/Habitat ship leave Mars orbit and return home in 7 months.
​
It is very important that the Astronauts leave for home within 30 days of landing on Mars. After 30 days, the distance between Mars and Earth will start increasing by millions of miles up to a distance of 250 million miles. Then Mars will be on the opposite side of the Sun.  If they miss their departure time, it may take up to a year before the Astronauts  are within the 35 million mile range for returning to Earth.
Mars Space Transport Ferry 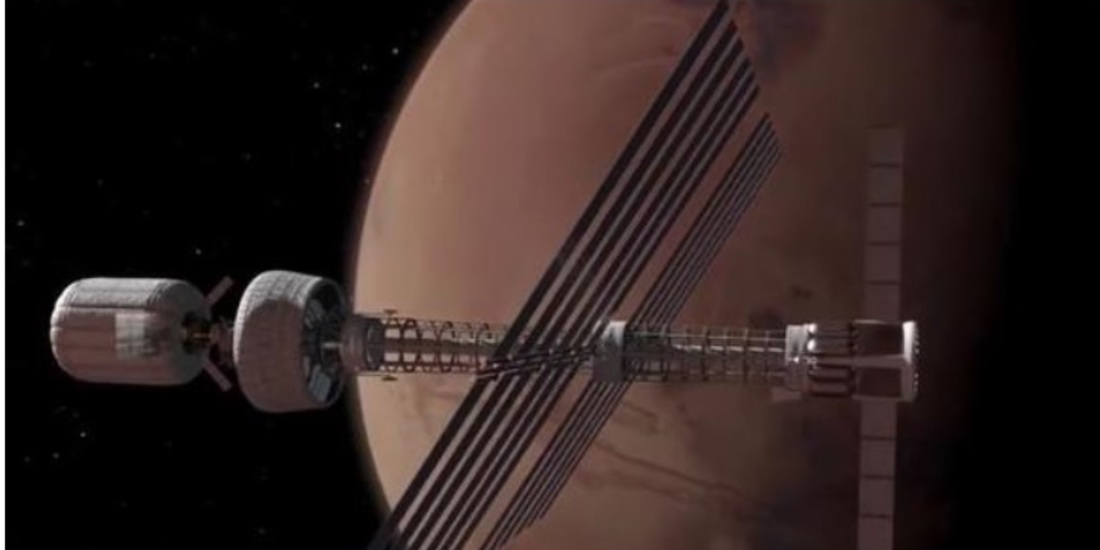 The above illustration of the Mars Space transport Ferry, also referred to as the Mars Space Tug, is courtesy of the Boeing Company which is building the Rockets and other Components for the Mars Mission.

The Mars mission begins by launching into Earth orbit Modules and Space Components on top of the SLS Rockets (www.explore-universe.weebly.com). In Earth Orbit, the Astronauts will assemble the Modules and Components into a Mars Space transport Ferry.

The voyage to Mars will take from to 2 to 6 months depending on which of the two rocket propulsion engines will be used to propel the Mars Space Transport Ferry. 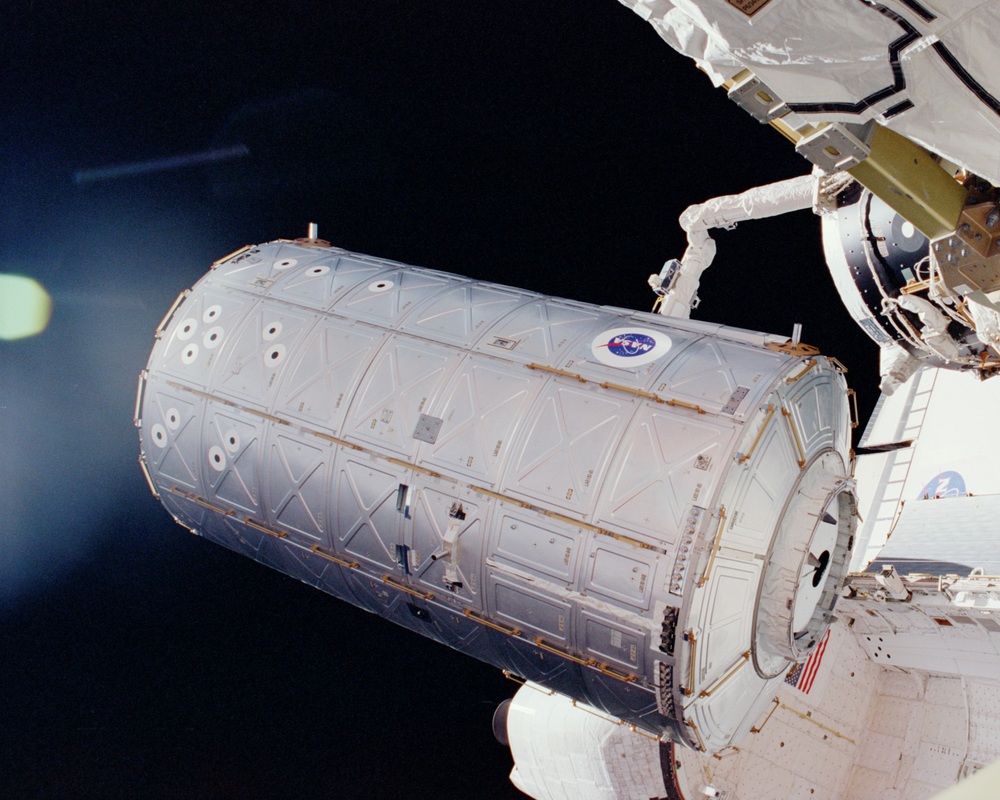 On the 2 to 6 months journey to and from Mars, the Astronauts will live and work in one or more Habitat Modules that are part of the Mars Space Transport Ferry. The Habitat Modules will be similar to the ones that make up the International Space Station Modules. It is possible that some of the International Space Station Modules will be refurbished and used on the Mars Space Ferry.
​
3. Multiple Mars Landers with Inflatable Decelerator Heat Shields 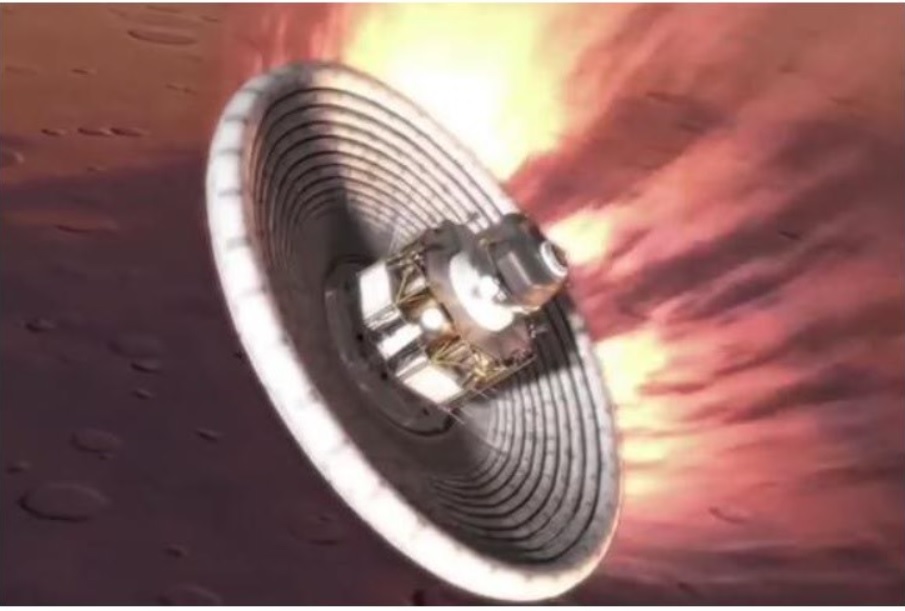 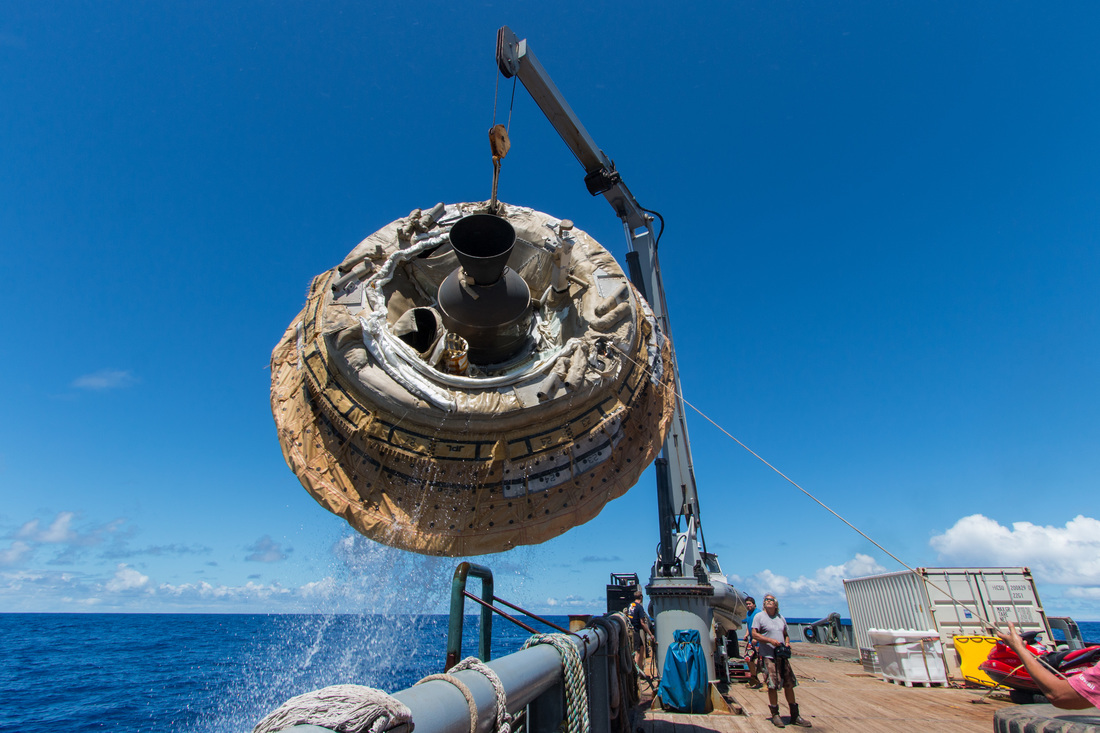 The above pictures are of a new technology landing system being developed by NASA and Jet Propulsion Laboratory for landing on Mars and Planets that have an atmosphere. It’s called the Low-Density Supersonic Decelerator (LDSD). In 2014 a prototype of the LDSD was successfully tested near Hawaii. It will be used to land people, Habitat Modules, and chemical processing Modules on Mars.
​
Once the Mars Space Transport Ferry is safely in orbit around Mars, multiple Mars Landers will leave the Ferry and land on Mars. They will include one or more Housing Habitats for the Astronauts to live and work for a few months or possibly a year on Mars. Then land the Supply Modules that will include a chemical processing Module that will interact with Mars Carbon Dioxide (CO2) Atmosphere and produce Water, Oxygen, Hydrogen, and Methane.
​
If all goes well with landing the multiple Modules, Astronauts will board the People Module and land on Mars.
​
4. Rocket Propulsion Engines for the Mars Voyage

There are two possible propulsion engines for the trip to Mars. The first one is Solar Electric Propulsion (SEP) and will take about 6 months to get to Mars. The solar arrays capture energy from the Sun and then convert it into electricity. The electricity ionizes a propellant like xenon and expels the IONs as ionized gas to create continuous trust power to the Space Ferry. The ION Propulsion engine is being used for deep space missions of robotic spacecraft. (IONs are extra electrons that are added or removed from neutral molecules of propellants) 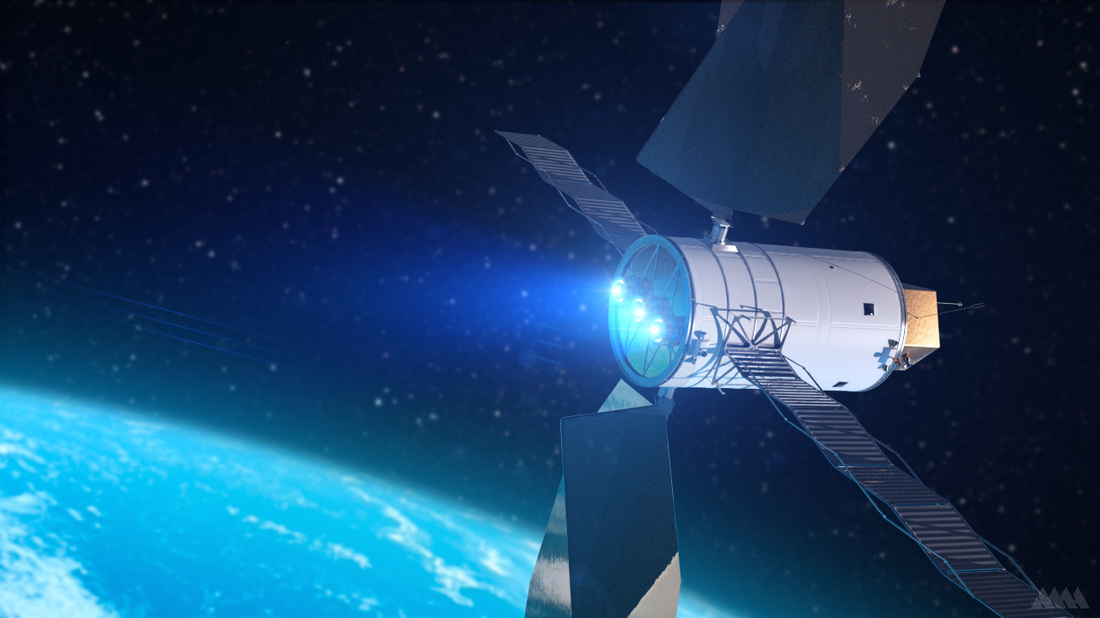 Solar Electric Propulsion Rocket Engine (SEP)
​
Vasimr plasma engine is the second propulsion engine. With this engine the Mars trip should take about 2 months. It works by converting ionized hydrogen or helium fuels into plasma and ejecting the plasma to create trust. This engine is still in the development research stage and maybe ready in the 2030’s. 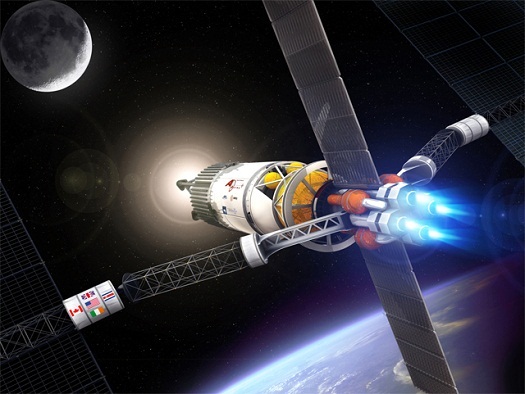 5. Mars Launcher
In the Apollo Moon missions, both the Moon Lander and Moon Launcher were part of the same Module. The top part of the Lander also served as the launch vehicle to launch the Astronauts into a Moon orbit and rendezvous with Apollo ship that would return them to Earth.

Similarly the Mars Lander top section will be able launch the Astronauts into a Mars orbit and rendezvous with the Mars Space transport Ferry that will bring them back to Earth. 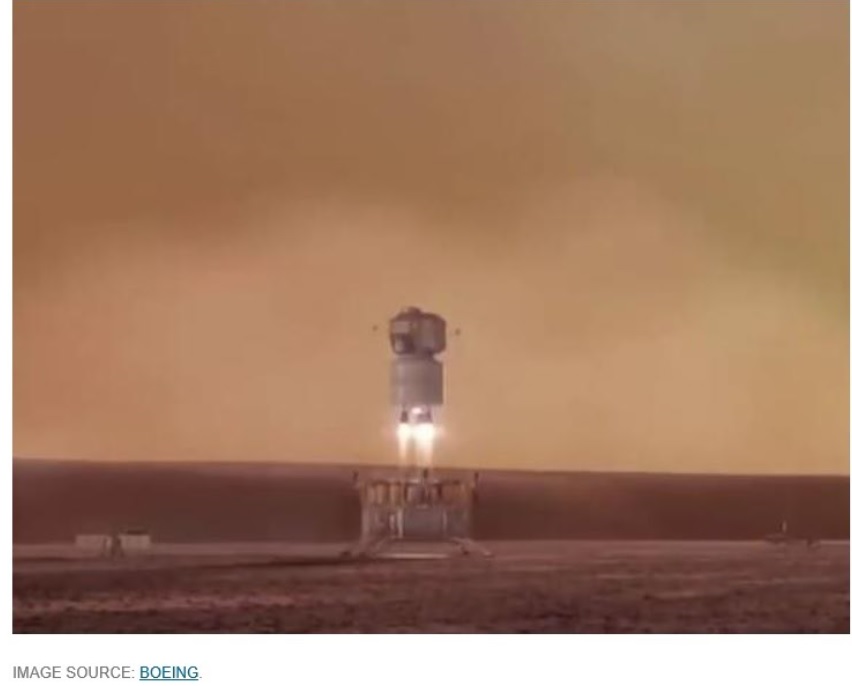 Will this Mars trip every happen? The answer is yes! If you ever were curious and tried to understand Human History, you would discover that God wired us to create new things and explore and try to know everything that makes up our world. In doing so, we learn a little more about God and prolong our existence on Earth.

When will the Human mission to Mars happen? There is a good chance it may take place in the current target date of 2035. But first, two things have to come together for the Mars mission to occur. Just like in Human History, a realization that Human survival is linked to this exploration coupled with the advancement of technology.

Example: Our planet is threatened by pollution, climate change, and carbonic acidification of our oceans. One of the major causes is too much carbon dioxide in our atmosphere due to Human activity. Guess which planet’s atmosphere is 95 percent carbon dioxide? If your guess is Mars, you are correct.

The chemical processing module that will land on Mars will contain hydrogen. The hydrogen brought from Earth will interact with Mars Carbon Dioxide atmosphere to produce water and methane (fuel). The methane is liquefied and stored. Some of the water is electrolyzed (broken apart) into hydrogen and oxygen. The oxygen is stored and the hydrogen is recycled through the chemical processing module to generate more water and methane. At this point if you are thinking that the development of a workable and practical technology to reduce carbon dioxide in our atmosphere may help save our planet, you are again correct.

The next evolutionary step is for us will be to convert the Mars Space Transport Ferry to a Solar System Space Transport Ferry. This Space Ferry will visit planets and especially their moons (that may contain life), Asteroids, comets and strange things that we did not know are out there. Humanity has a lot of questions about our origins and how God created us and the world around us. Some of those answers are hidden in our Solar System for us to discover.
​
This series of articles and our Human exploration is just the beginning.