An Exoplanet is a planet that does not orbit the Earth's Sun, but orbits a different star, or a stellar remnant, or a red dwarf Sun or a brown dwarf Sun. 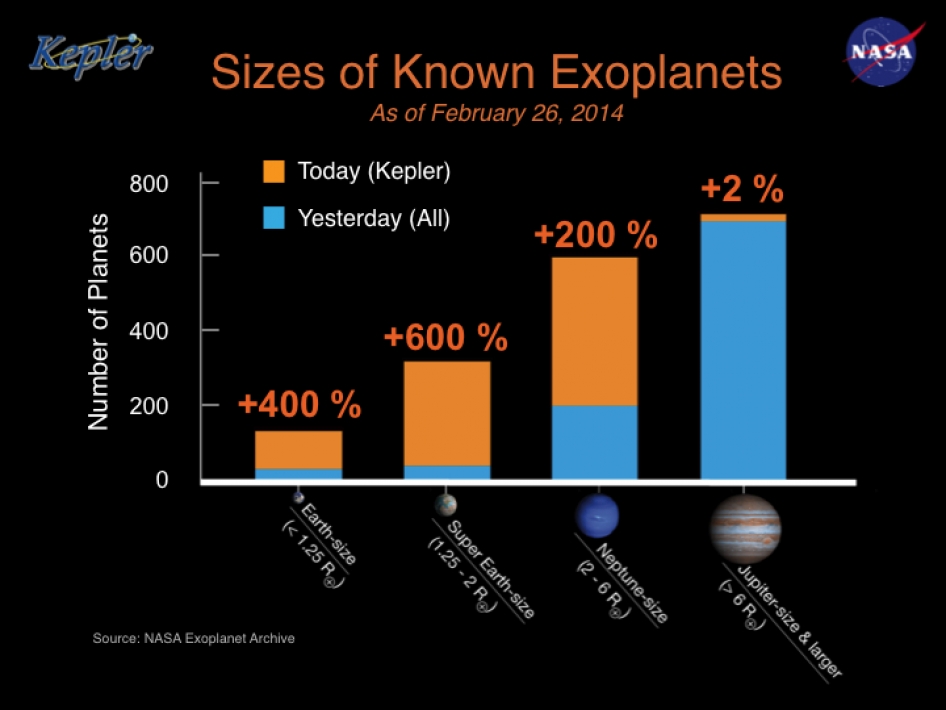 The moment our ancestors realized there are other planets besides the Earth orbiting our Sun (or orbiting the Earth as the case maybe before Copernicus), they wondered what was on those planets. Today we know something about the composition and atmosphere of all the planets in our Solar System and with our amazing instruments have gone beyond our home Solar System to explore the planets of other Solar Systems in a search for signs of plant and animal life.

Through the eyes of the Kepler Space Telescope launched March 7, 2009, we have found about 4,234 potential planets. Of those, only 977 planets have been confirmed as real planets.  From this group about 180 are rocky planets that are about 1.5 times bigger than the Earth, 350 are about 2 times or more the size of the Earth (Super Earths). Many of these rocky planets are orbiting their Stars in the “habitable zone”, but because of their larger sizes and other neighborhood obstacles, life forms are less likely to evolve on them.

This year Kepler Astronomers discovered a planet named “Kepler-186f” that is very Earth like. It’s the right size and orbiting its Sun at the right distance (“habitable zone”) for liquid water to exist on the surface and for life to evolve and thrive.

Before we start packing our bags to visit our cousins on Kepler-186f, we need to examine the data we already have and patiently wait for confirmation that water, an atmosphere, nitrogen, carbon and other elements necessary for life are present on Kepler-186f. The good news is that we have Space projects to do that.

TESS (“Transiting Exoplanet Survey Satellite” Keplers successor) telescope will be launched in 2017 by NASA. The mission's primary goal will be to identify terrestrial planets in the habitable zones of nearby stars. TESS will be followed by the launch in 2018 of the “James Webb Space Telescope” the next generation successor to the “Hubble Space Telescope”. The “James Webb Space Telescope” will focus on Kepler-186f and other Earth like planets identified by TESS to determine their chemical composition, temperature and atmospheric conditions.

Before continuing our story about Kepler-186f, two important concepts need to be understood. First we are searching for life organism based on the element Carbon. Why Carbon base? Because Carbon is an element essential to living organism for life as we know it. Could there be life forms based on different elements such as Silicon. Maybe, but not very likely because only Carbon has the diversity and complexity to be synthesized into more than a million compounds of which many are necessary for life to exist.

Given that all life in our world would not exist without Carbon, how Carbon is produced in Stars is amazing. Stars like our own Sun fuse Hydrogen Atoms to produce Helium Atoms. When the Star runs out of Hydrogen Atoms, Helium Atoms then start to fuse (Red Giant phase of our Sun in about 4 billion years). Now this is the amazing part. First, two helium atoms fuse to create Beryllium. Then within the space of a hundred trillion of a second (0.000000000000001 second), a third Helium atom combines with the Beryllium to produce Carbon (miracle called double-resonance). This tells us something about the awesomeness of God.

The second important concept is that of Time. Kepler-186f is 3,000 trillion miles (500 light years) from Earth. Let’s pretend there is a civilization similar to ours but with better telescopes on Kepler-186f. At the same time we discovered them they have also discovered us. Because information from their telescopes cannot travel faster than the speed of light, they will be looking at Earth as it was 500 years ago. Therefore they are not seeing Earth 2014, but an Earth 1514. The same will be true when we are able to explore Kepler-186f. We will also be 500 years behind their actual Time.

Here is what we now know about the planet Kepler-186f. Its location is in the constellation Cygnus. Our Solar System is the Virgo neighbor.

It is important to note that both locations are in the Goldilocks corridor. For Earth it is around 25,000 to 30,000 light years or 180,000 trillion miles from the center of the Milky Way Galaxy. This is the just the “right” distance from the Milky Way Center for planets, moons, asteroids and other galactic structures to evolve complex molecules that would include life organism. Too close to the center of the galaxy, extreme deadly radiation will not allow the existence of life forms, too far from the center and there will not be enough element materials to build planets or galactic structures that could support life organism.

That is why our searches are focused on Solar System Planets in our Milky Way Galaxy that are about the same distance from the Galactic Center as we are. 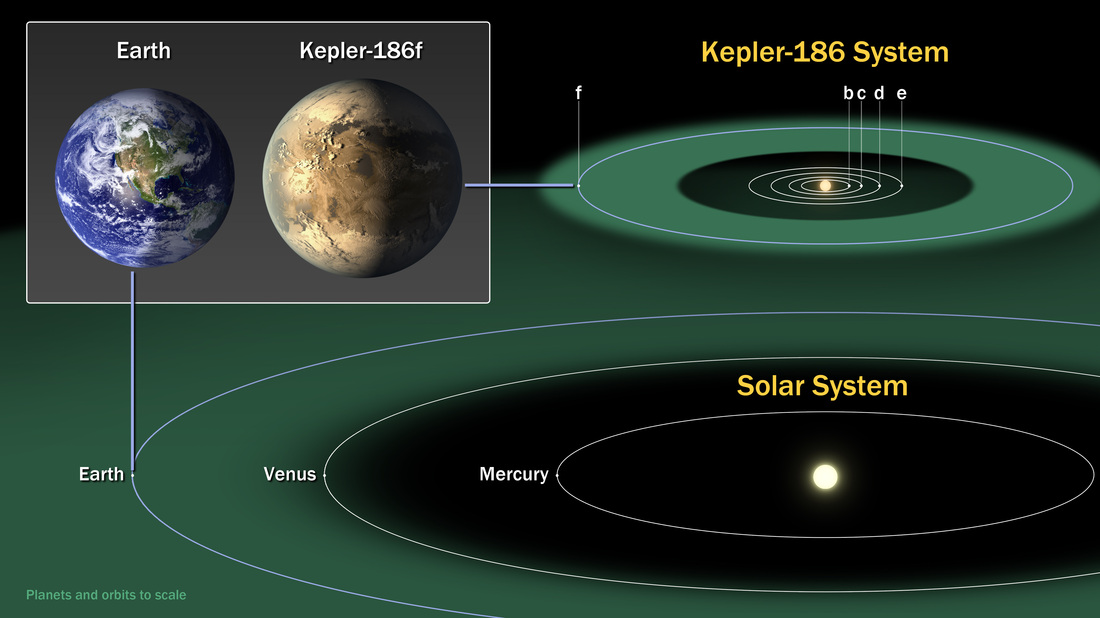 Kepler186f is orbiting a Sun classified as an M dwarf or red dwarf Star. It’s about half the size and mass of our Sun. Red dwarf Stars make up about 70% of all the stars (out of 100 billion Stars) in our Milky Way Galaxy.

While our Earth orbits our Sun once every 365 days, Kepler-186f orbits its Sun once every 130 days. Kepler-186f is joined by 4 other planets that are 1.5 times the size of the Earth in orbit around their Red Dwarf Star. Because these 4 planets are very close to their Sun, the chance of living organism on them is not likely.

As more information about Kepler-186f becomes available, this article will be updated.

Originally Goldilocks universe - 7 was to focus on the discoveries of the Spacecraft Cassini studying our Planet Saturn. The Saturn Cassini article will be posted at a later date.