In August 2006 The International Astronomical Union downgraded the status of Pluto from a Planet in our Sun's Solar System to a dwarf planet. Little did they know that a robotic Spacecraft named New Horizon launched earlier that year would find Pluto not just another rock floating in space but an exciting dynamic planet full of wonders.
​
As of May 2016, about 40% of data from New Horizon has been processed and analyzed. Here what the scientist found starting with the atmosphere.
​
Small planets or moons usually don’t have an atmosphere because their gravity is too weak to hold on to one. There are exceptions and Pluto is one them. 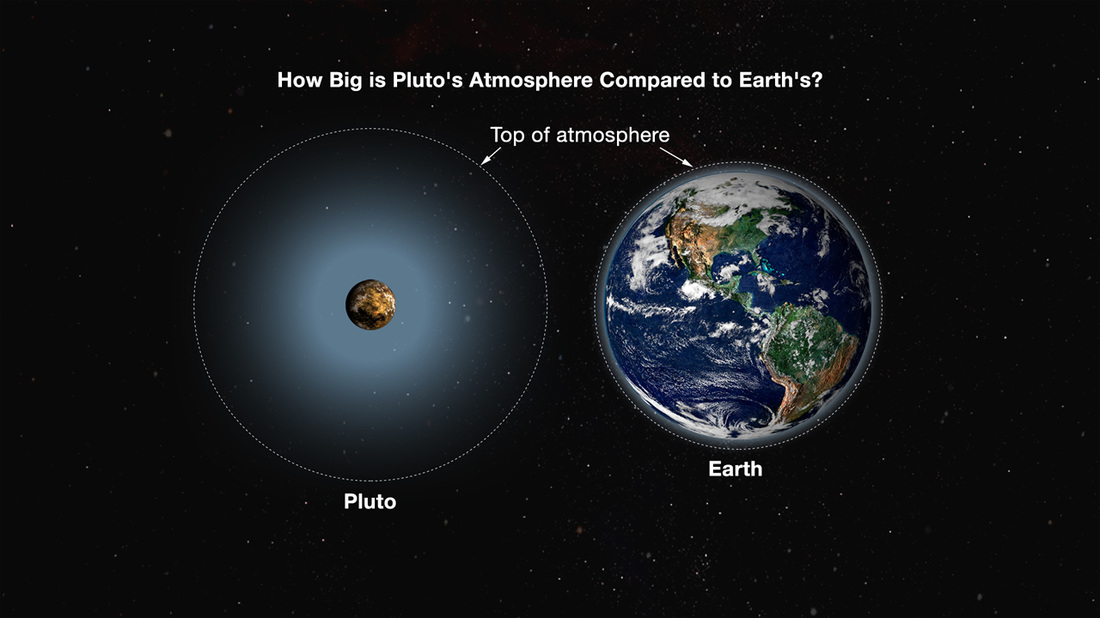 Both atmospheres produce rain. On Earth we experience rain as drops of water while if we were on Pluto drops of Tholins would turns us a reddish-brown color like the surface of Pluto.
​
Tholins can be best described as organic gunk produced by complex hydrocarbons, such as ethylene and acetylene. The Spacecraft Cassini found Tholins on Saturn’s Moon Titan. 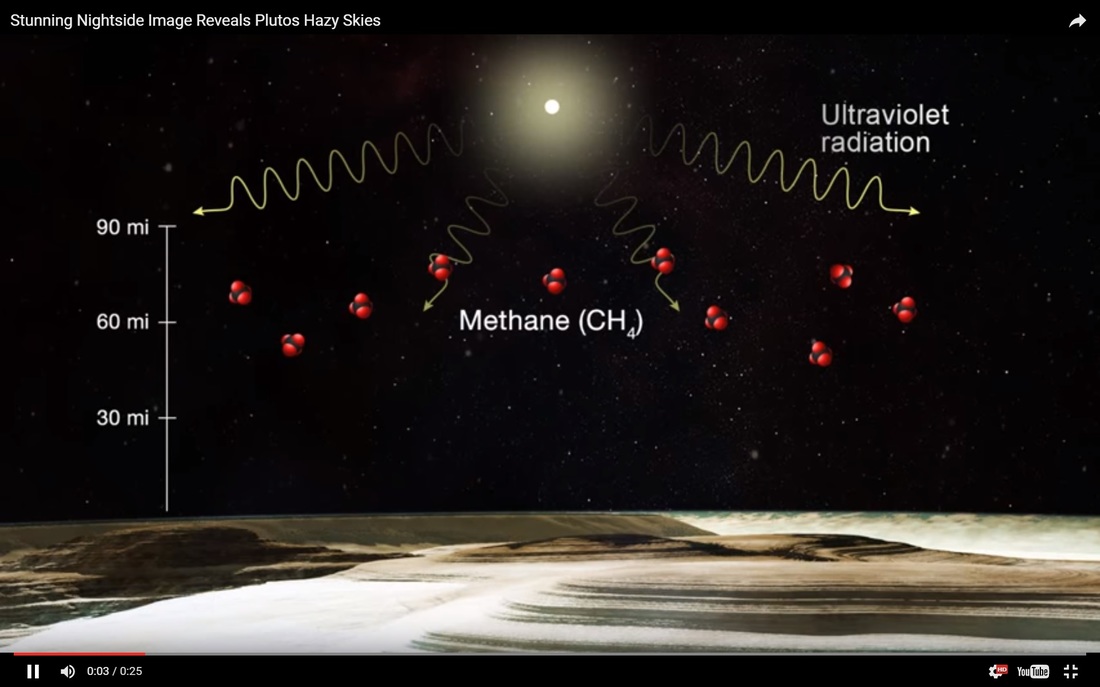 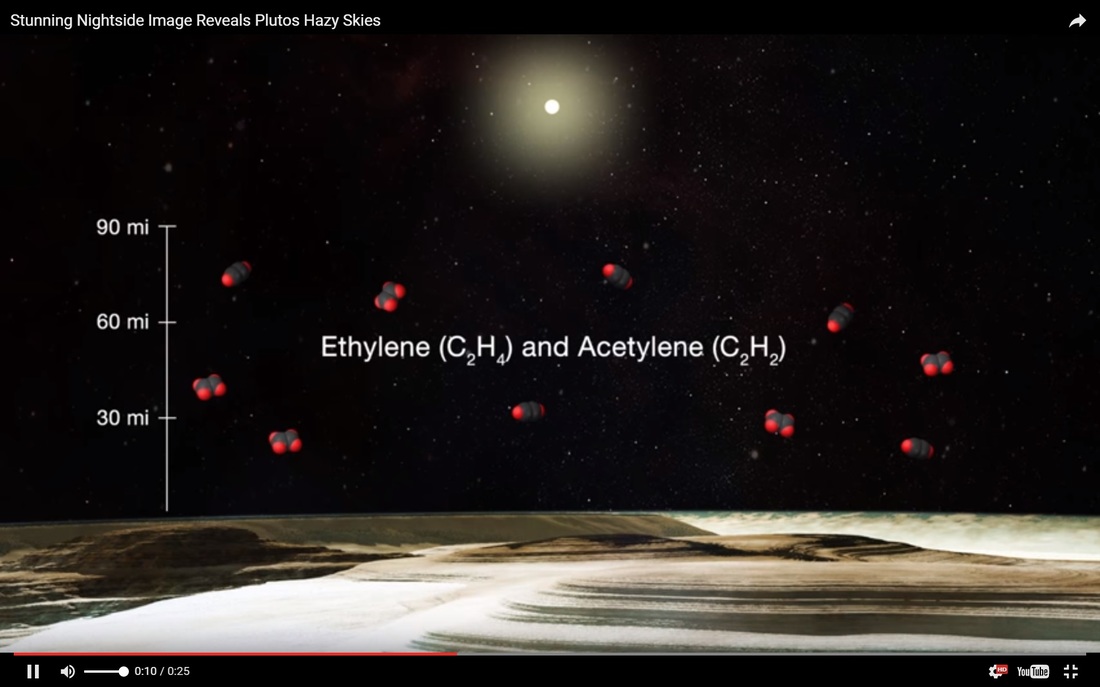 This leads to the buildup of complex hydrocarbons, such as ethylene and acetylene. 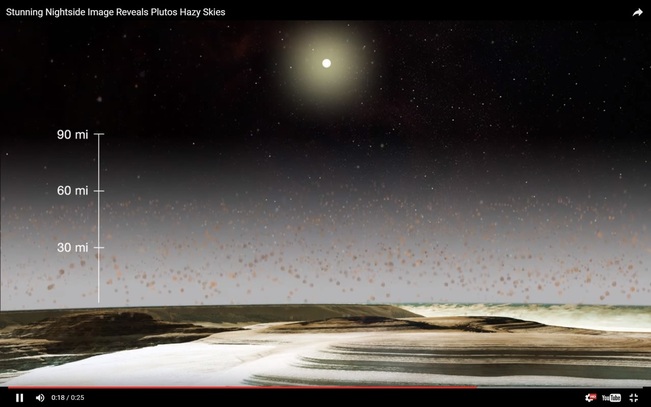 Clumps of these hydrocarbons condense as ice particles to form the hazes that get chemically converted to Tholins which fall to the surface of Pluto. credits: NASA/JHUAPL/SwRI

There is Scientific speculation that Tholins played a role in the appearance of life on Earth. In the first billion years of life on Earth, that life was just bacteria. We know from experiments on Earth that many soil bacteria can feed off Tholins as a source of Carbon. One of those bacteria was cyanobacteria (blue-green algae microbes). Cyanobacteria conduct photosynthesis using sunshine, water and carbon dioxide to produce Oxygen.

During this production of Oxygen, Tholins also played a role by absorbing ultraviolet light protecting the early fragile bacteria organisms from UV rays. Once Oxygen was formed in the Earth’s atmosphere 2.3 billion years ago, Tholins not compatible with Oxygen dissolved.

Water and floating Mountains can also be added to New Horizon’s discoveries. In Pluto’s lower Atmosphere ice water crystals were discovered that scientists speculate came from a deep underground lake. Most likely this water was heated by buried radioactive materials and then propelled to erupt through Ice Volcanoes.

The eruptions of the Ice Volcanoes account for resurfacing of smooth surface areas that are younger in age than the rest of the planet. The Sputnik Planum is one such area.

In addition to Ice Volcanoes erupting water into the atmosphere, Pluto also has floating Ice Mountain like structures (Hillary Montes and Norgay Montes in Goldilocks Universe 8). They rise about 3 miles above the surface. Beneath these Mountains are ice water on top of bedrock of nitrogen and carbon monoxide ice. Nitrogen and carbon ices are denser that water, therefore Pluto’s mountains float on them like icebergs on water.

For a small planet that just 1500 miles in diameter Pluto is not short on Moons. Charon is 750 miles in diameter and the four irregularly shaped pipsqueak moons, Styx, Nix, Kerberos and Hydra range from 15 to 27 miles long spin very fast and in all directions.
​
​As the rest of the data from New Horizon is analyzed, new discoveries will find their way to the Goldilocks series.
​