Thousands upon thousands of years ago our ancestors looked up at the night sky and wondered what’s up there and how did we get here. Today we their decedents in the year 2018, have partial answers to both questions. The easy answer is that within GOD/Heaven occurred an event we named “The Big Bang”, a beginning of creation of matter, energy, entropy, quantum fields, and things we don’t have a clue exist. The more difficult question to answer is how did God do it?

As Beings created in the image of God, we were bestowed with God like powers to transform matter and energy found in Nature into skyscrapers, smart phones, and a robotic spaceship named Cassini-Huygens. This is a story of how that amazing spaceship named Cassini-Huygens provided another small piece of the puzzle of how God did it and then became a part of space exploration history.
​
Just like their star gazing ancestors, on September 15, 2017, our Astronomers were also gazing at the sky but this time through digital computer screens focusing on particular tiny spot about 900 million miles away. They were watching Cassini intentionally crash into our planet Saturn so as to prevent the possibility of contaminating extraterrestrial life that might exist on Saturn’s moons Enceladus and Titan. 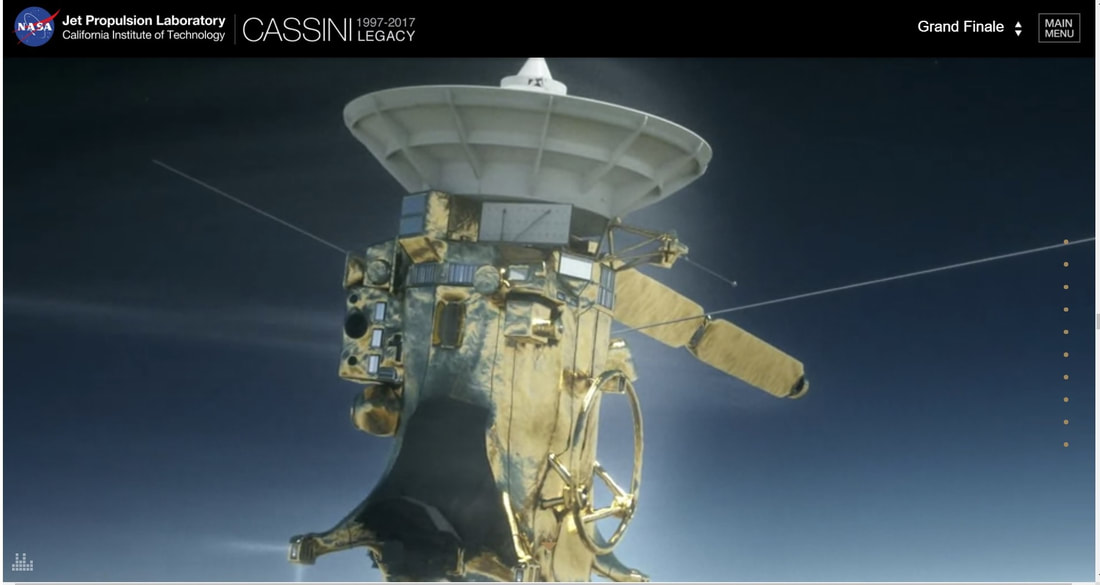 With attitude control rocket thrusters blasting at maximum power to keep the robotic space ship stable, Cassini traveling at 77,200 miles per hour, entered Saturn’s upper atmosphere at 1,200 miles above the cloud tops. Every precious moment was used to continuously sample Saturn’s atmosphere and immediately transmit that data to Earth.
In Cassini’s final moments, it took Magnetic field measurements to better understand Saturn’s rotational rate, it continuously analyzed the composition of dust particles in Saturn’s atmosphere. Every bit of information took 90 minutes to reach Earth. In the atmosphere, at about 930 miles above cloud tops, Cassini started to tumble, lost contact with Earth and was no more.

Cassini-Huygens mission focused our attention on Saturn’s world, a miniature solar system of its own with 35+ moons. On board this amazing 6 tons Spaceship (22 feet high and 13 feet wide) were 12 scientific instruments (listed at the end of this article).
Those instruments discovered 2 oceans, one beneath the surface of Saturn’s moon Titan and the other beneath the frozen ice of Enceladus.

The Ocean under the ice of Enceladus is most likely to contain non-Earth life (see Goldilocks Universe 6B) because based on our current understanding of an environment for life to exist, it requires water to be in contact with a rocky surface, organic nutrients, and an energy source. Enceladus has all four.
​
On Titan Cassini’s instruments revealed an Ocean under its surface of rocks and dirt made of water ice, hundreds of seas and lakes of liquid methane and ethane (besides Earth, the only other planetary body in our Solar System to have surface liquid), and hydrocarbon sand (created by Methane rain). Scientists are not certain if the ocean is in contact with silicate rock needed for life. 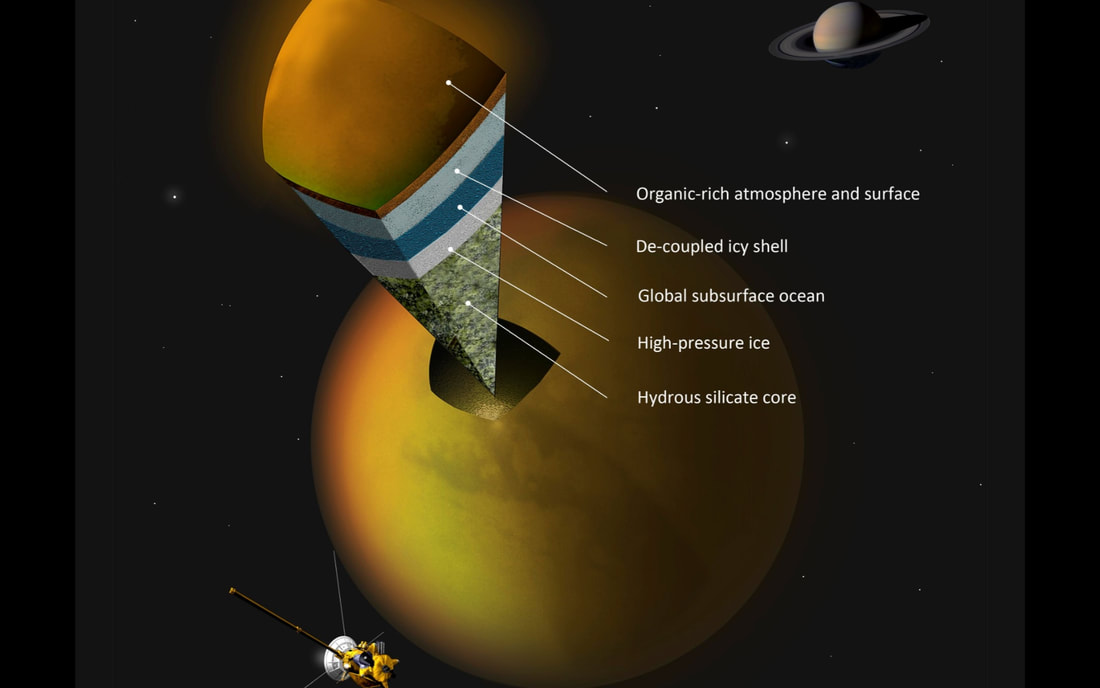 On Earth sand dunes are made of silicates, on Titan sand dunes are composed of frozen water ice coated with Hydrocarbons. They resemble the  sand dunes of Earth's Arabian deserts. Some of Titan's sand dunes are hundreds of miles long and about 300 feet high.

Another comparison of Titan with earth is the Atmosphere. Titan’s Organic-rich atmosphere is made of Nitrogen Methane and Argon.  Of course, on Earth it’s Nitrogen, Oxygen and Argon.

Like Earth, Titan has seasons, but on Titan they last about 7.5 years. In 2011, Cassini watched the transition from Fall to Winter at Titan's south pole and then observed Summer come to the North Pole. There are rainstorms (Methane & Ethane) on Titan.

Cassini left us with many mysteries that will continue to inspire future Astronomers to build and launch more Cassini-Huygens type successor space ships or even develop spaceships with people aboard to personally explore the wonders of our Solar System and learn more about God.

Scientific Instruments aboard Cassini
1 Imaging science subsystem: -- Takes pictures in visible, near-ultraviolet and
near-infrared light.
2 Cassini radar: -- Maps surface of Titan using radar imager to pierce veil of haze. Also used to measure heights of surface features.
3  Radio science subsystem: -- Searches for gravitational waves in the universe; studies the atmosphere, rings and gravity fields of Saturn and its moons by measuring telltale changes in radio waves sent from the spacecraft
4 Ion and neutral mass spectrometer: -- Examines neutral and charged particles near Titan, Saturn and the icy satellites to learn more about their extended atmospheres and ionospheres.
5 Visible and infrared mapping spectrometer: -- Identifies the chemical composition of the surfaces, atmospheres and rings of Saturn and its moons by measuring colors of visible light and infrared energy given off by them.
6 Composite infrared spectrometer: -- Measures infrared energy from the surfaces, atmospheres and rings of Saturn and its moons to study their temperature and composition.
7 Cosmic dust analyzer: -- Studies ice and dust grains in and near the Saturn system.
8 Radio and plasma wave instrument: -- Investigates plasma waves (generated by ionized gases flowing out from the Sun or orbiting Saturn), natural emissions of radio energy and dust.
9 Cassini plasma spectrometer: -- Explores plasma (highly ionized gas) within and near Saturn’s magnetic field.
10 Ultraviolet imaging spectrograph: -- Measures ultraviolet energy from atmospheres and rings to study their structure, chemistry and composition.
11 Magnetospheric imaging instrument: -- Images Saturn’s magnetosphere and measures interactions between the magnetosphere and the solar wind, a flow of ionized gases streaming out from the Sun.
12 Dual technique magnetometer: Studies Saturn’s magnetic field and its interactions with the solar wind, the rings and the moons of Saturn.

Cassini also took close up pictures and gather data of other Saturn moons. One of them was Rhea second largest Moon after Titan. It’s a heavily cratered moon billions of years old. Rhea has a thin atmosphere of oxygen and carbon dioxide. 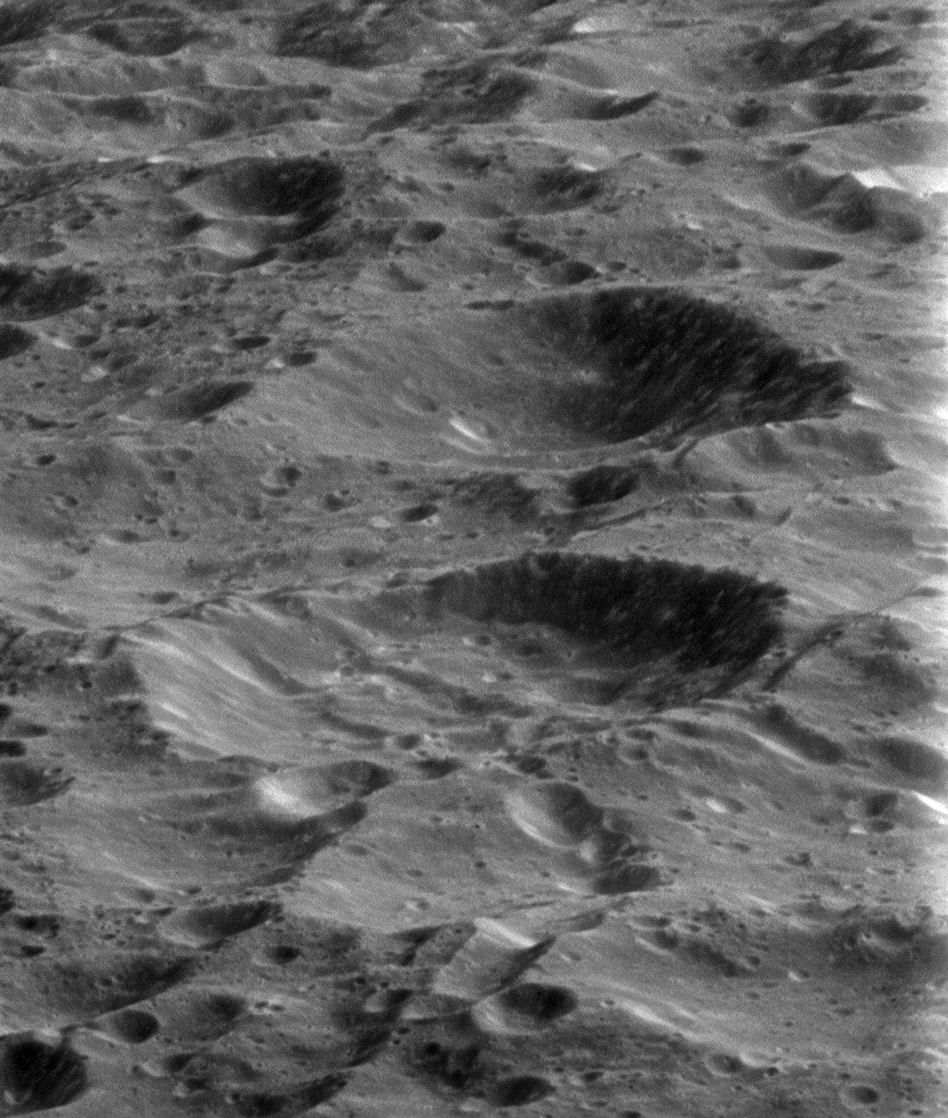 Data suggest that Saturn's moon Dione is composed of ice and silicate rock with suspicion of water beneath the surface. 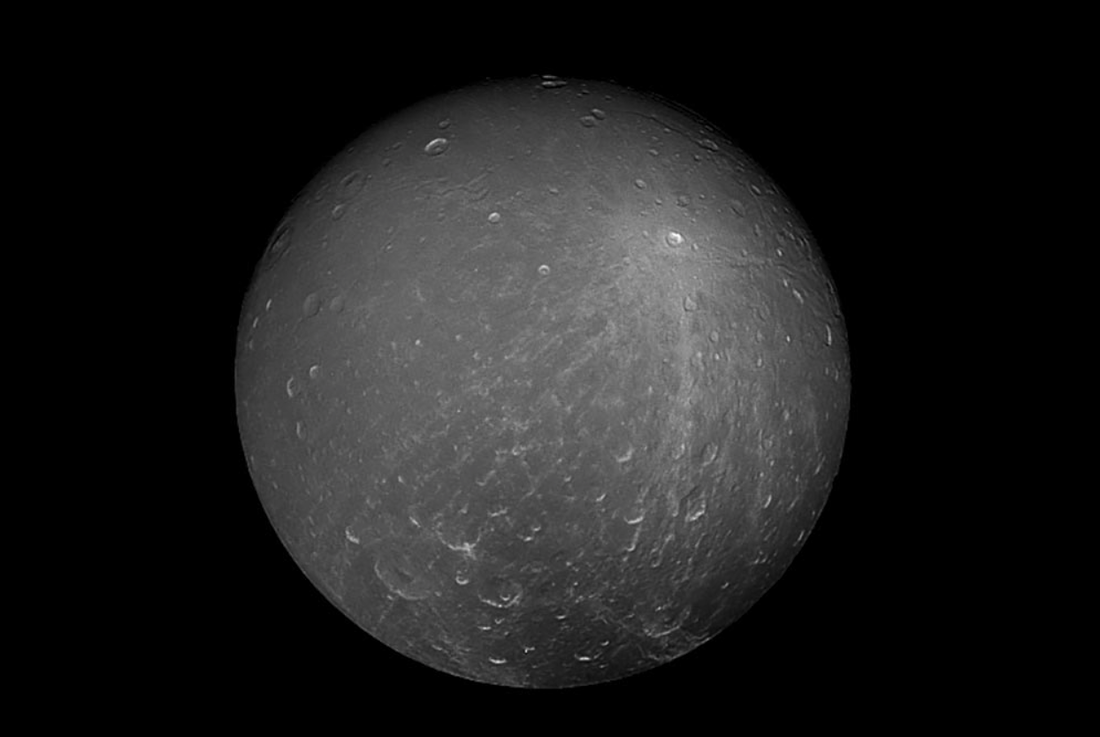