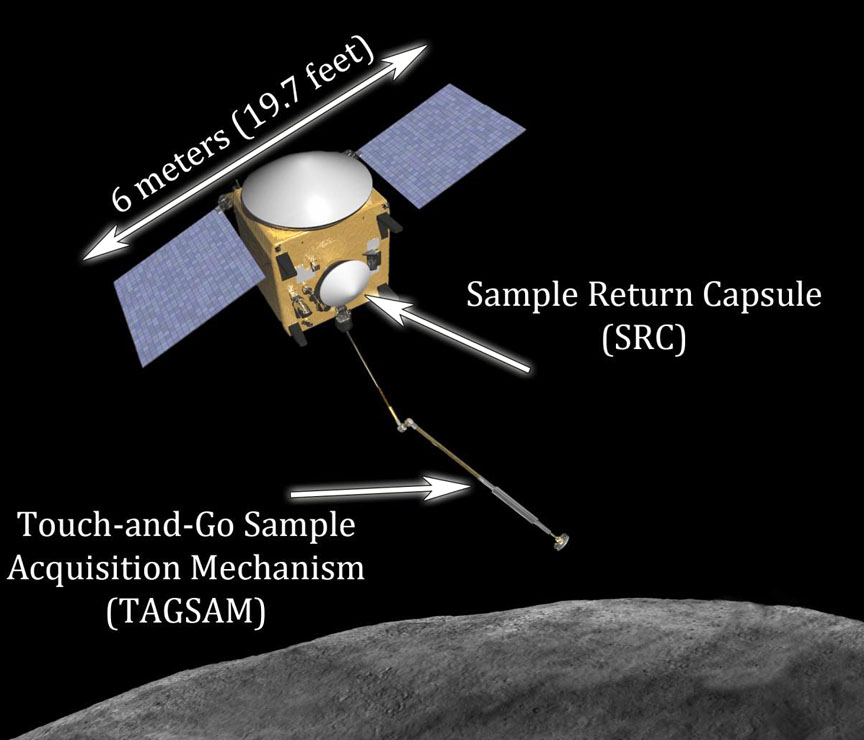 OSIRIS-REx will launch from Cape Canaveral, Florida, on an Atlas V 411 rocket during a 34-day launch period starting Sept. 8, 2016. OSIRIS-REx will orbit the sun for a year, then use Earth’s gravitational field to assist it on its way to Bennu. In August 2018, OSIRIS-REx’s approach to Bennu will begin. It will use an array of small rocket thrusters to match the velocity of Bennu and rendezvous with the asteroid.

The spacecraft will begin a detailed survey of Bennu two months after slowing to encounter Bennu. The process will last over a year, and, as part of it, OSIRIS-REx will map potential sample sites. After the selection of the final site, the spacecraft will briefly touch the surface of Bennu to retrieve a sample. The sampling arm will make contact with the surface of Bennu for about five seconds, during which it will release a burst of nitrogen gas. The procedure
will cause rocks and surface material to be stirred up and captured in the sampler head. The spacecraft has enough nitrogen to allow three sampling attempts, to collect between 60 and 2000 grams (2–70 ounces).

In March 2021, the window for departure from the asteroid will open, and OSIRIS-REx will begin its return journey to Earth, arriving two and a half years later in September 2023. The sample return capsule will separate from the spacecraft and enter the Earth’s atmosphere. The capsule containing the sample will be collected at the Utah Test and Training Range. For two
years after the sample return (from late 2023-2025) the science team will catalog the sample and conduct the analysis needed to meet the mission science goals. NASA will preserve at least 75% of the sample at NASA’s Johnson Space Flight Center in Houston for further research by scientists worldwide, including future generations of scientists. 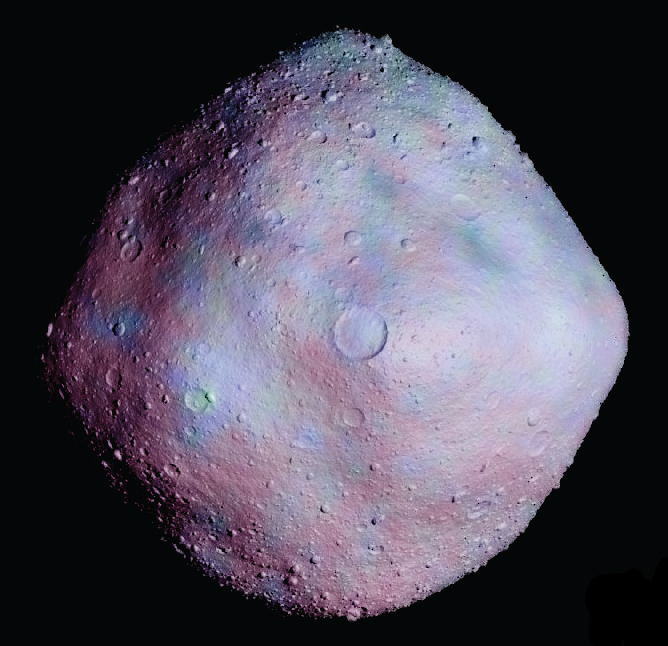 Asteroid Bennu
For many years, NASA has been tracking Asteroids that are potentially dangerous to the Earth from ground base Telescopes (To Boldly Go -1). Guess what? They found one and labeled it 101955 RQ36 or the Bennu
Asteroid.

Bennu is circling the Sun in an elliptical orbit and every six years it comes close to the Earth at a distance of 278,867 miles. For comparison, the Moon is an average of 237,000 miles from Earth. This Asteroid at 1,840 feet in diameter can cause catastrophic harm to our planet if it enters our atmosphere. Its probability of crashing into the Earth is estimated to be in the year 2182 assuming Bennu’s orbit is not altered. True by that century people will routinely soar thru deep space and probably have picnics on Asteroids. The technology in 2182 will have the ability and means to protect the Earth. But there is a concern that Bennu may reach the Earth a lot sooner because of the “Yarkovsky effect”. No, this is not another Russian Comedian in the US.

The “Yarkovsky effect” is a small push caused by our Sun on an asteroid, as it absorbs sunlight and re-emits that energy as heat. That small push is like a
rocket thruster that over time will add up to change the Asteroid’s orbit. Also
there are other factors that influence the orbit of Bennu like its shape,
wobble, surface composition and rotation and even collisions with other
Asteroids. This means that we cannot predict with any certainty the time that
this Asteroid becomes a danger to the Earth.
OSIRIS-REx Spacecraft

The next time Bennu is in the Earth neighborhood will be in the year 2018. In that year it will be greeted by a Spacecraft that will be launch in 2016 with a very long name: “Origins-Spectral Interpretation-Resource Identification-Security-Regolith Explorer” or just OSIRIS-REx for short. This visitor to Bennu will conduct a six month study of the surface at a distance within three miles. At the end of its mission OSIRIS-REx will move closer to the surface of Bennu and with its long arm collect a minimum of 2 ounces of surface material. The Asteroid sample will be returned to Earth and after a fiery re-entry through
the atmosphere, float down by parachute over the Utah desert in September 2023.

Again, why are we doing missions like OSIRIS-REx? And the answer is the same. Asteroids are leftovers from the cloud of gas and dust -- the solar nebula -- that collapsed to form our sun and the planets about 4.5 billion years ago. They contain the original material from the solar nebula, which can tell us about the conditions of our solar system's birth. Asteroids are rich in carbon, a key element in the organic molecules necessary for life. Organic molecules have been found in meteorite and comet samples, indicating some of life's ingredients maybe created in space. Scientists want to see if Organic molecules are present in Bennu.

In the year 2023, Astronauts will be analyzing an Asteroid that was put in orbit around the Moon (To Boldly Go -1) and bring back to Earth a much larger amount of Asteroid samples and then compare the data to the Bennu's mission.

Future “To Boldly Go” articles will contain progress updates in our exploration of Asteroids.