Continuing from the Higgs Boson 4 story we were about to enter the Quantum Word. But first we must heed some warnings.

1. Some of the concepts and ideas presented as we go forward are going to seem bizarre. Example: When we look around our environment, we see family, friends, children, trees, flowers and too many things to list. When we are NOT looking (our eyes are closed), the reality that actually exists is totally different.  The realities surrounding us are vibrating and interacting Quantum Fields. Examples of Quantum Fields: electromagnetic, quarks, photons, gluons, pions. electrons, Higgs, neutrinos, bosons, gravity…. When we open our eyes and observe the Quantum Fields they become people, tables, trees….

2. Stranger yet, it is the Electromagnetic Field that reigns in the atoms of our physical bodies and everything that we see and touch. This Electromagnetic Field gives substance to all solid matter.  Otherwise our atoms would be all over the place and we would exist only as energy. As we shall discover later, everything in our world including us are made up of 98 percent energy and 2 percent solid matter.

3. Quantum Fields are NOT made of anything (matter or energy). They are JUST THERE and EXIST EVERYWHERE in our universe. In the beginning, all the Fields, except for one, had a zero value. The exception is the Higgs field which always had a very large value.

4. During my study of Quantum Physics, I came to a profound realization. All Human institutions, knowledge, and beliefs are based on assumptions. What is meant by assumptions is that in all these human fields of endeavors (political, medical, historical, technological, religious, science…..), our understanding of all the facets of them are sometimes incomplete and sometimes incorrect. As the social and intellectual capabilities of Human Beings continue to evolve, these assumptions are minimized.

The assumptions of how Gravity works does not end with Albert Einstein. Our knowledge of Gravity is still incomplete and future discoveries probably will modify Einstein’s General Law of Relativity.

Now back to our story of the physical composition of the Human Body.

In a brief re-cap, we started with the 9 major organ systems, continued to the cell level, and arrived at water, organic compounds, inorganic minerals and elements. We are now at the doorstep in the world of Atoms.

Reminder: each Atom is distinguished by its number of Protons and Electrons. If the Atom has 8 Protons and 8 Electrons, then it is an Oxygen Atom. If it has 6 Protons and 6 Electrons then it’s a Carbon Atom.

We are now entering the world of the Atom. The diagram of the Standard Model of Particle Physics below is to be used as a reference.

The Standard Model of Particle Physics
Source: Professor Sean Carroll - The Great Courses - The Higgs Boson.
Author Sean Carroll: "The particle at the end of the universe". 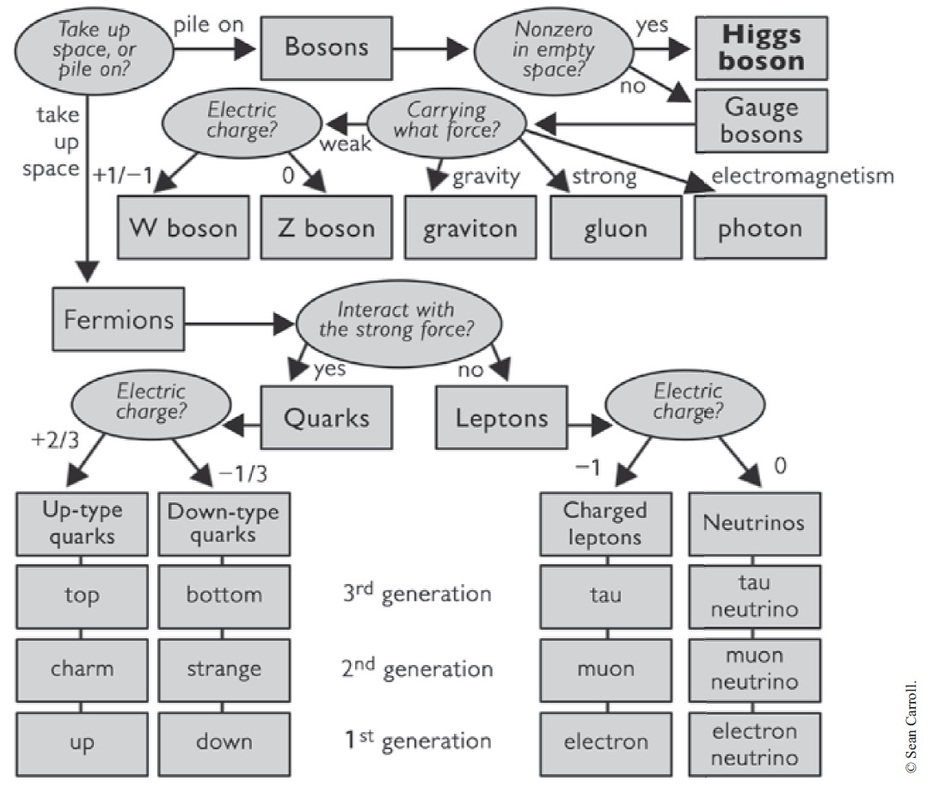 An individual Atom with only one Proton, one Neutron and one Electron 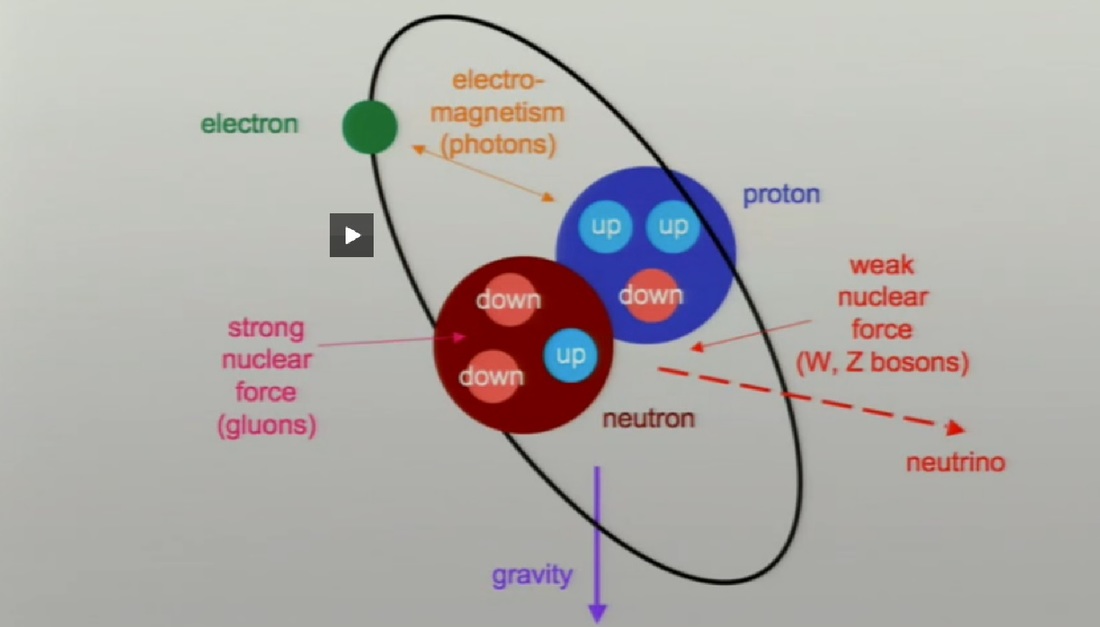 The Atom is made up of the following particles and forces:

3.  In the above picture of the atom we only see UP and down Quarks inside Protons and Neutrons. What we don't see, also inside the Protons and Neutrons are Phantom Quarks called Mesons. They continuously appear and disappear inside each Atom. They disappeared when the above picture was drawn (a little humor here). More details about Atoms in future Higgs Boson articles.

Mesons = pairs of Quarks and Anti Quarks that appear and disappear inside the Protons and Neutrons.
Examples: Strange & Anti Strange pair, Charm & Anti Charm pair, or Up & Anti Up pair. Max number of Phantom Quark pairs = 3.

4.  Electron - The Quantum Higgs Field gives the Electron mass enabling the Electron to connect to the Proton to create an Atom.

5.  Gluons = Strong Nuclear Force that binds the Quarks together.

7. Neutrino and Gravity will be discussed in a later articles.

Inside the Protons and Neutrons are Quarks and Gluons fluctuating at a tremendous rate, creating energy that will constitute 98 percent of the Mass and weight of Protons and Neutrons. That leaves only 2% for solid matter. We do not have to consider the Mass of the Electron because it is negligible.

That is how our physical Human Bodies are made of 98 percent energy.

Important Notes about Matter and Energy:

2.  To a scientist, matter is energy not traveling at the speed of light.

4.  The Large Hadron Collider (LHC) at CERN after verifying the existence of the Higgs Boson was shut down to update the strength of the magnets to achieve higher energy levels. The LHC is up and running again. Future Higgs Boson articles will present the LHC discoveries.

6.  Author’s Personal Note! Energy is an invisible existing substance. We are 98 percent energy. Therefore there is not a big jump from a Physical Human Being to a Spiritual Soul.