To Boldly Go “Orion” is going to focus on more recent developments and progress of Humans travelling in Space Ships within our Solar System exploring the Moon, Asteroids, Mars and Comets. 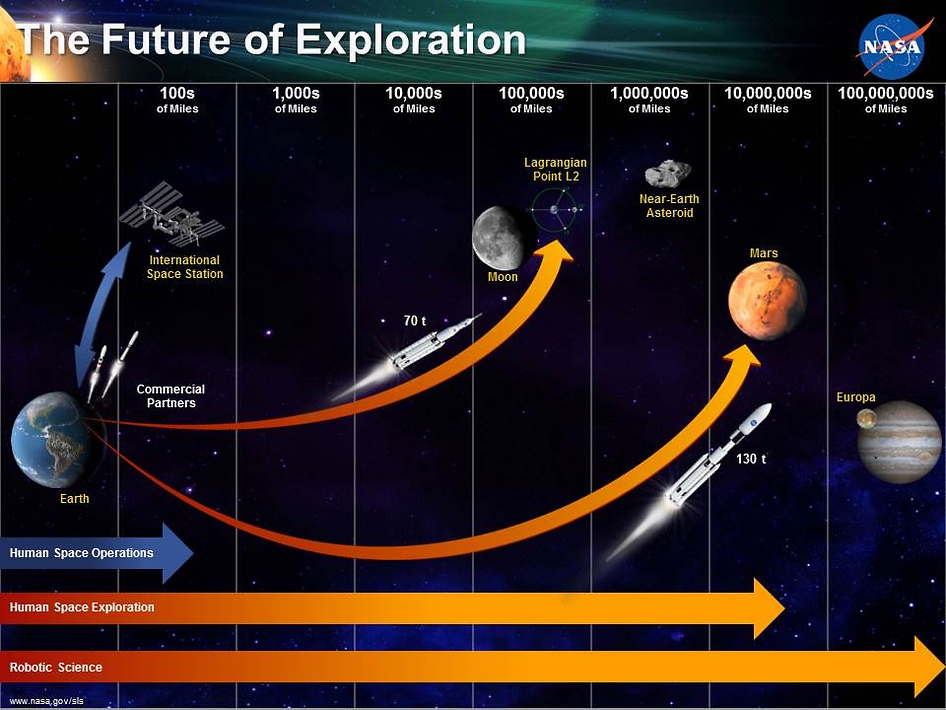 Distance that the 70 ton cargo SLS Rocket will launch the Orion Space Ship with Humans on board to explore Asteroids = ~ 280,000 miles from Earth.

Both the 70 ton SLS Rocket and the 130 ton cargo SLS Rocket will be used to assemble a Mars Space Transport Ferry that will include the Orion Space Ship with Humans on board. Depending on the type of Space Ferry (also referred to as a Space Tug) Propulsion Engine used (ION SEP or Vasimr Plasma) the trip to Mars will take 2 to 6 months. Mars at its closet point to the Earth is about 46.8 million miles. "To Boldly GO 7 Destination Mars" provides more details of the Human Voyage to Mars.

By the year 2021, NASA will launch a Spacecraft named SEP (Solar Electric Propulsion) to capture a small near Earth Asteroid, enclose it a plastic container and nudge it into a LAGRANGIAN POINT L2 orbit around the moon.

Lagrangian Point is a point in space at which a small body (in this case, the small Asteroid, the Orion Spaceship, and the Humans on the Asteroid) under the gravitational influence of two larger bodies (in this case the moon and the earth) will remain approximately at rest relative to both the Moon and the Earth. This means that the Space Ship and the people on the Asteroid will be in a safer stable orbit around the Moon.

L2 means a distance from Earth in space where Space Ships and Space Craft are isolated from the Earth’s infrared and radio emissions.