A 35 minute rocket burn slowed Juno from about 165,000 miles per hour to about 163,788 miles per hour. This inserted Juno into 3 long elliptical polar orbits. Each orbit of Jupiter will take  53 days to complete. During these 3 orbits the science instruments will be checked out and tested.
​
Beginning with orbit 4 and ending with orbit 36 Juno will drop down and fly closer to Jupiter in elliptical orbits. Now each orbit will just take 14 days to complete. Juno will be at 2,600 miles at its closest distance from Jupiter and 4,900 miles at its farthest.

What do we hope to accomplish with the Juno mission? From previous robotic spacecraft, especially the Galileo mission to Jupiter, we learned our theories of planetary formation were wrong. Juno's adventure hopefully will improve our understanding of the birth of our Earth and our Solar System and in so doing gifted us with new spectacular mysteries to solve. Juno’s primary mission is to reveal to us how Jupiter formed and shed some light on the vital role Jupiter played in the formation of Earth and the planets in our Solar System. More important the knowledge gained from this exploration will tell us something about how God does things and makes things just right for us to be here.

One of the theories (Grand Tack) is that Jupiter was the first planet to coalesce from the dust and debris in the swirling disk created by the birth of our Sun. In analyzing data from the Kepler Telescope of other Solar Systems, we found that giant planets like our Jupiter hang around close to the Sun. In this theory, our Jupiter also migrated to the vicinity where our Earth and Mars now orbit the Sun. Jupiter cleaned up the region by limiting the dust and debris so close to the Sun. This prevented our Earth during its formation from becoming a Super Earth (twice the current size). A Super Earth would not be able to support life.

Shortly after Jupiter was formed, Saturn was formed and then followed Jupiter towards the Sun. The planetary interaction between Jupiter and Saturn resulted in both planets being deflected to their current orbits, allowing Mercury, Venus, and Earth, and Mars to form. Along the way they dragged dust and debris away from the inner region to a region between Mars and Jupiter we named the “Asteroid Belt”.

Over the next few months, I will elaborate more on the scientific instruments aboard Juno and Jupiter mysteries we are trying to solve.
Credit: NASA and Jet Propulsion Laboratory 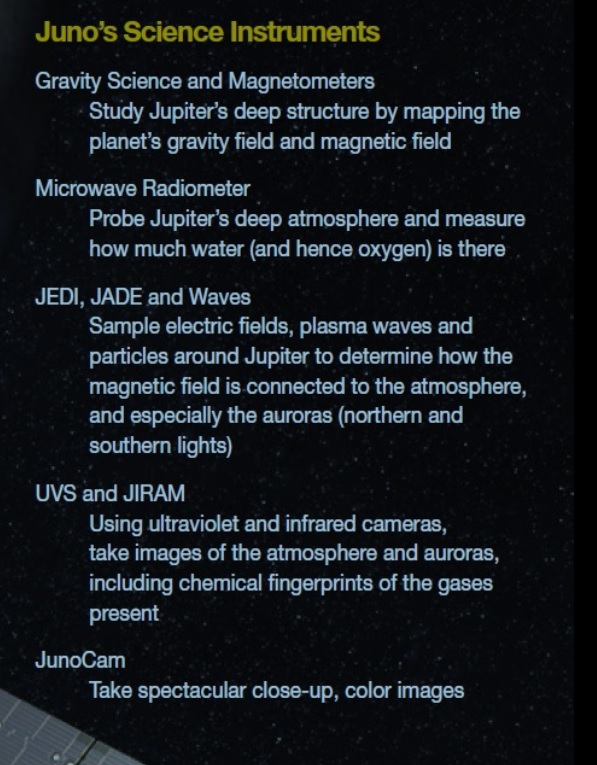