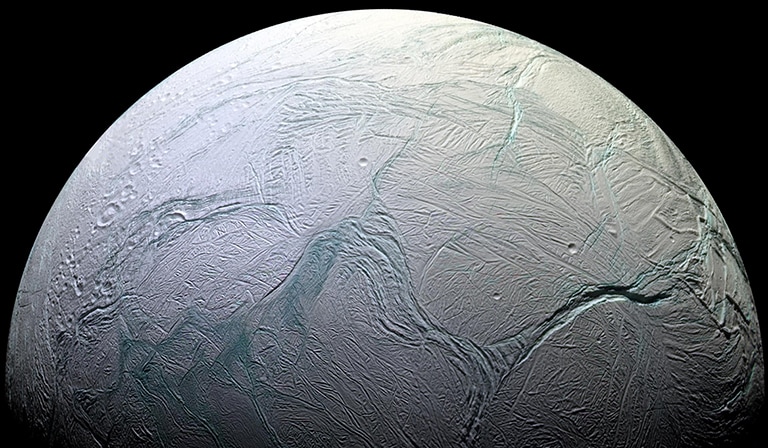 Credit: NASA/JPL-Caltech
God created us and all of humanity with two super powers: A Mind and a Soul. Our Mind if we exploit its potential, will transform us into brilliant beings. Our Soul if we tap its passion will enable us to soar to amazing heights. This is a story of a team of people like us that are using these two super powers to search for non-Earth life and in the process, discover how God created us and our universe of Trillions of living creatures and organism in addition to a gazillion stars and planets.

The story begins with people like us that used their super powers of brilliance and passion to send in 1997, a robotic space machine named Cassini-Huygens to explore the Planet Saturn (closest distance about 780 million miles from earth) and its multiple moons. Today, Cassini (Huygens, a probe attached to Cassini, that landed on Saturn’s moon Titan in 2005) is reporting to us that there may be non-earth life on Saturn’s moon Enceladus and prebiotic life on Saturn’s moon Titan.

For 13 years (2004 to 2017) Cassini traveled in various long elliptical orbits around Saturn, with flybys of Saturn’s 35+ moons but was careful to stayed outside of Saturn’s Rings (the ice and rocks would have destroyed Cassini). This remarkable space mission amassed tons of data and observations that will translate into a wealth of knowledge about our Solar System that will take many years to comprehend.

The amazing success of Cassini means the mission must end now (September 2017) and Space Ship Cassini destroyed. Why? Because on Saturn’s Moon Enceladus there is an ocean of water beneath the ice crust and there is evidence that Enceladus’s ocean may harbor non-earth life.

For now, Cassini’s scientific instruments are working very well, but the space ship is running out of fuel and will soon become uncontrollable. There is grave concern that Cassini might crash into Saturn’s moons Enceladus or Titan (with prebiotic life). The Cassini ship was sterilized (1990’s technologies) for living organism before launch from Earth in 1997, but there is fear that some bacteria or microbes may have survived the sterilization and are traveling on board Cassini.

In the visionary minds of NASA, Jet Propulsion Laboratory and the European Space Agency there are plans to send another spacecraft to land on Saturn’s moon Enceladus, drill through Enceladus’s ice crust and launch a submarine probe to explore Enceladus’s Ocean for non-Earth living organism. We do not want the submarine probe to find life in Enceladus’s ocean that originated from Cassini stowaway earth microbes and bacteria. So, the new robotic Enceladus Spacecraft will be sterilized with more current technology.
​
Our curiosity peaked with the first astonishing pictures of Saturn’s moon Enceladus. As Cassini flew by Enceladus, pictures of geyser-like jets of water and ice particles were spewing from the southern pole of Enceladus. 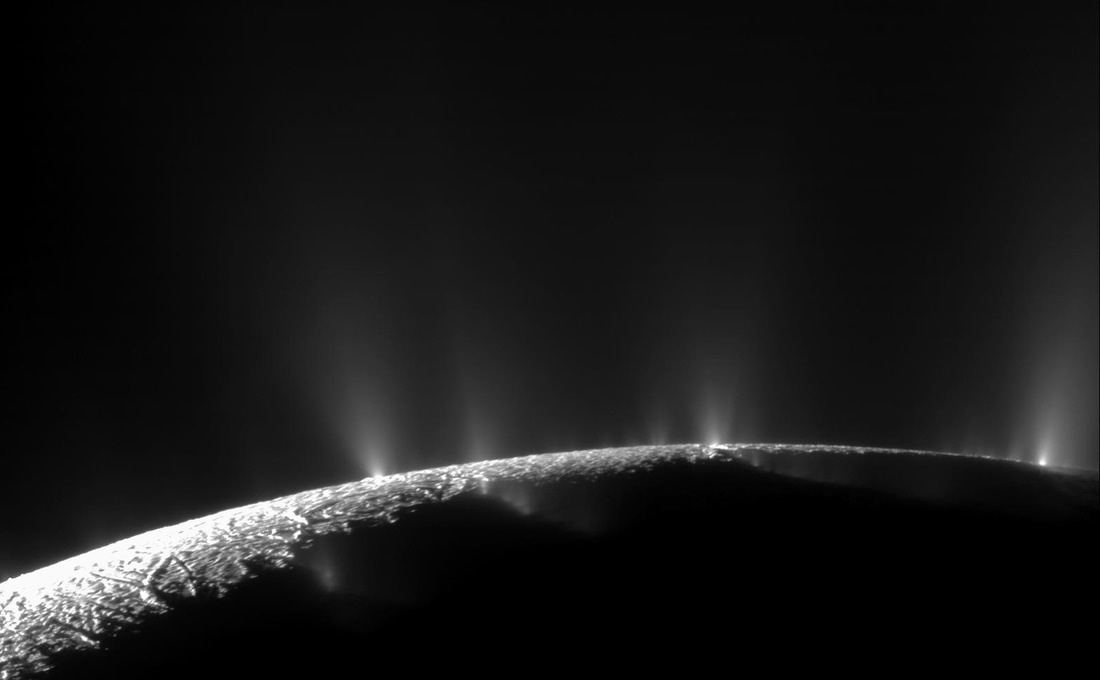 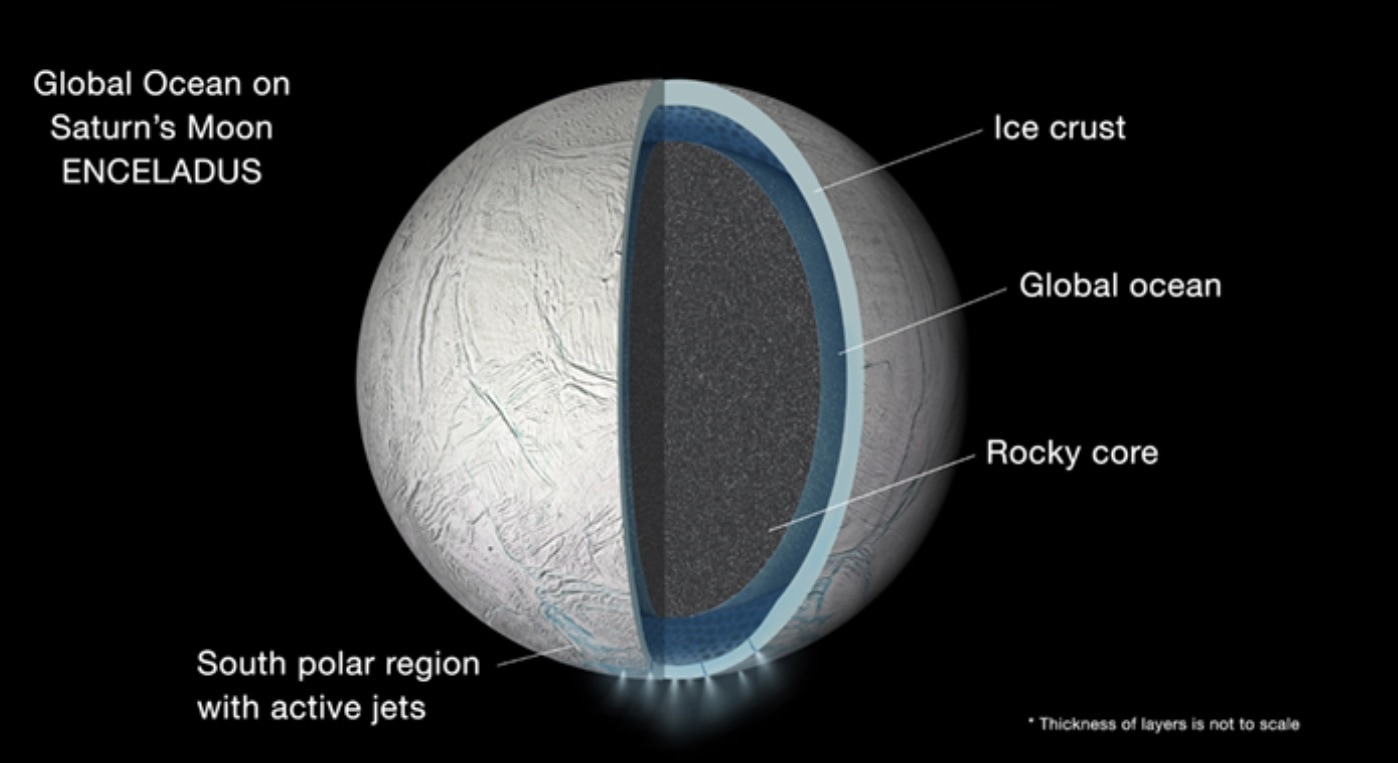 Credit: NASA/JPL-Caltech
​Cassini’s orbit of Saturn was adjusted for more flybys of Enceladus. A remarkable discovery by Brilliant Humans began to unfold.

First, analyzing the geyser-like jets of water and ice particles, it was discovered they were a combination of water vapor, carbon dioxide, molecular hydrogen, nitrogen, carbon monoxide and silica nanograins. All of this is continuously being shot hundreds of miles into space at 800 miles per hour. Some of this material falls back to the planet and becomes Enceladus’s atmosphere, the rest becomes part of Saturn’s vast E ring.

Putting all the data together from all the different instraments, the following are the early findings. 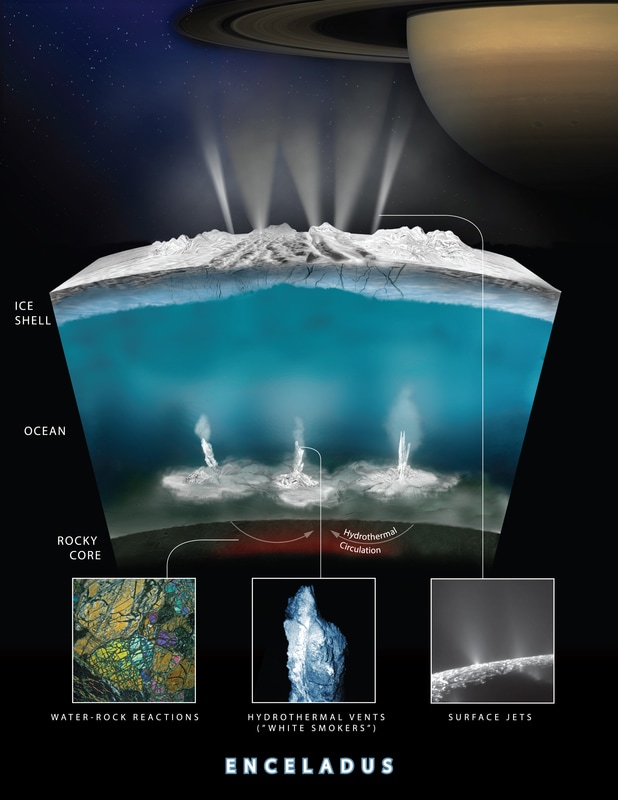 Credit: NASA/JPL-Caltech
For life as we know it to exist, water must be present with elements like carbon.  We just discovered a Moon in our Solar System with water and carbon. Many of us are excited that we will find non-Earth life on Enceladus.
​
To be continued Goldilocks Universe 6C -  “Cassini The Grand Finale”